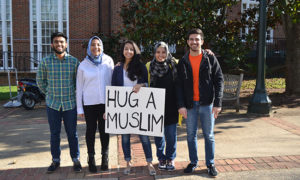 Prejudice, stereotyping, bias—however we understand these tendencies and attitudes, we can learn to identify, confront, wrestle with, accept, and change them within ourselves. Sometimes, however, doing so is possible only with great difficulty.

Discrimination takes many forms, including harassment, bullying, hate speech, and scapegoating. Such behaviors put others at risk, cause harm and—at times—may even threaten lives. Given our current national and global tensions, what can an ordinary person do to reduce Islamophobia and the threat it poses to us all?

Shortly before the holidays, Gary Reiss, Ph.D., a process worker and LifeWorks colleague in Portland, OR, sent an email to our community about curbing Islamophobia wherever we encounter it. Gary’s email referenced a Huffington Post article written by Manal Omar, Associate Vice-President of Middle East and Africa Center at the United States Institute of Peace. In that article, Omar shares eight actions anyone can take to help concretely reduce the threat Islamic Americans may feel in the our nation’s current political climate.

I am reposting the actions that Omar enumerated.  You may want to think about and consider using some or all of these in your daily life.

Tangible actions anyone can take to reduce Islamophobia in their community:

Click here to read Manal Omar’s article, “As a Muslim, My Heart Freezes with Fear,” in its entirety.

Omar ends his article with the following words (emphasis mine):

If you or someone you care about has experienced Islamophobia or any kind of bias based on a negative attitude toward a certain religious, cultural, or spiritual belief or expression of identity, know that you are not alone. Religious and spiritual minorities often face harassment, prejudice, and stereotyping, sometimes on a daily basis. Whether this treatment arises from ignorance or malicious intent, it frequently leads to feelings of frustration, isolation, depression, ostracism, anger, self-hatred, and hopelessness—feelings your aggressor may, in fact, be tangling with themselves.

As each of us travels on our own journey of self exploration, only you can determine which spiritual path you choose to follow or disregard. However, as Manal Omar makes clear, there are some simple steps all of us can take to challenge discrimination, comfort those who are hurt, and seek help when we need it. Making the corner of the world where we live a safer place is something each of us can do.