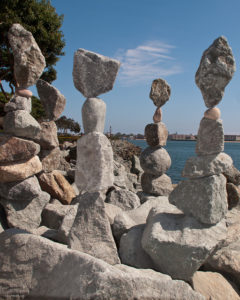 This is the fifth in a series of articles about the intersections of polyamorous identities and psychotherapy, adapted from Rami Henrich and Cindy Trawinski’s article in Sexual and Relationship Therapy, “Social and therapeutic challenges facing polyamorous clients,” as well as supplemental materials that didn’t make it into the final research paper. In this installment, we explore the ways in which people in polyamorous relationships create and language the relationship constellation and make agreements, negotiations, and contracts to share and divide their time, space and attention among multiple partners as equitably possible.

In a polycule, there are no clearly defined roles or expectations about how people should share, divide, or let go of their attention, sex, time, and money—commodities that often characterize connection in monogamous relationships. This lack of established conventions is partially due to the fact that there are few, if any, polyamorous relationship models to guide people through the maze of relationship concerns that inevitably arise from polyamory. As a result, many polyam people painstakingly craft relationship contracts and agreements that challenge all partners to explicitly define, accommodate and appreciate the needs and desires of everyone in the relationship.

There are numerous critical areas of concern polyam individuals frequently must determine for themselves:

In the original 2011 study, all 12 participants spoke about some of the challenges mentioned above and shared the ways in which they have attempted to create and define their needs and boundaries within a multi-partnered relationship.

The Pains of Poly Terminology

The polyamory community has developed a vocabulary to help people talk about their sometimes complicated relationship structures. Some people use the terms “primary,” “secondary,” and “tertiary” to specify and describe the roles of their partners. Viewing and relating to one partner as “secondary” may help the primary partner hold onto a sense of their importance and protect the relative strength of that relationship.

These distinctions can provide clarity and help to avoid conflicts, but they can also imply or bring about a hierarchical structure that ranks partners and relationships relative to one another. So-called “secondary” partners sometimes feel marginalized within the constellation of relationships. People may disagree about how they view and experience their connection within the overall polycule.

Virtually all individuals in polyamorous or consensual non-monogamous relationships must come to terms with the challenges of defining their roles, formulating and negotiating constellations of relatedness across multiple partners. One individual who participated in our study, and whom we’ll call “Anna” (all names have been changed to protect individuals’ identities), shared an experience that illustrates these challenges. Anna, a woman in her 40s, is a secondary partner to Paul, whose primary relationship is with his wife, Rita. Note that, in describing her role, Anna refers to herself as “the mistress,” yet she finds the language of “primary” and “secondary” difficult and marginalizing.

Paul hates the term “secondary.” I am very much a primary in his life and yet, you know, there is a reality and that is that he is with his family most of the time, and I am here, and if there are the holidays or birthdays, his birthday or Valentine’s Day … do I get to be a part of that or not? Does he come down here? Does Rita join us? So, I would have to say that, in some ways, I do feel marginalized, not because he has any desire for me to feel that way, but because the reality dictates that at this point.

Paul is working on getting me there for Thanksgiving for the first time. I want to meet his mom who is terrified to meet me. It is all very scary! I don’t know how I will fit in, especially if her [Paul’s wife’s] family is there. … I am the “mistress,” and they are very conservative politically and religiously. And there I am, this Jewish girl coming out to the farm and sleeping with their sister’s husband!

In this example, the term and designation of being a secondary partner was painful for Anna and for her partner Paul. She associates secondary-ness with having less privilege in the relationship, having less input in decision making, and being less included. The fact that Anna used the term “mistress” to characterize how the family views her points to her fears and concerns about the perceived legitimacy of her relationship with Paul, and her own desire for validation, equity, and acceptance.

Another participant in our study, however, described having a very different relationship to the term secondary. “Helen,” a woman in her 30s, is currently in the process of divorce. At this time in her life, she prefers being a secondary partner:

Although both of these participants were in the process of divorcing at the time of the interviews (and were divorcing because their husbands could not accept their polyamorous identities), they each described very different experiences of occupying the role of secondary partner. For Anna, a secondary role was painful and marginalizing, while for Helen, it was relieving, positive, and preferred. This disparity among just two people highlights how important it is for therapists to keep their assumptions about relationship roles in check, and to take the time to discover how the people we serve think and feel about their roles, whatever those roles might be.

In the following interview excerpts, three women who have been in a polyamorous relationship together for under one year discuss how they formed their relationship, manage boundary issues, share attention, and create time for sex.

We spent a lot of time working on a contract. I think [it took] two weeks. … I felt that it really helped our relationship because it underlined the idea of boundaries and communication, and we had to discuss what things were allowed and what things were not allowed. … That contract time was one of our closest times together because we were discussing really hard topics … It helped Crystal feel good . . . and Crystal did not feel she was being replaced.

When asked what has been the most challenging aspect of identifying and living as polyamorous, Crystal told us:

I have mentioned that experiencing and letting go of your partner, and understanding that just because she is loving someone does not mean she is not loving you. Understanding that emotional part, and then being outspoken about a lot of things, and the practical side of organizing who is with whom when, and if that feels good for everybody, has been I guess the most challenging at this stage right now.

We have tried different things. For example, splitting the weekend, my partner spending one day with me and one day with her, [but] that has not worked out and has not been very practical. We are currently trying to have one weekend with one partner and one weekend with the other one, so at least if there are changes in schedule for whatever reasons—for example, it is Ella’s weekend and for whatever reason they are spending it in the city—it is still her weekend with Ella. So, Ella has the priority. And it seems to work well in that way. That there is a recognition that that is your time and sometimes we are having respect and are staying away, and then sometimes we are off spending the time together the three of us.

Ella described working on boundary issues, and reflected on building a relationship with Crystal as well and what it’s like to share her girlfriend, especially in terms of sex:

I feel strange just walking in the bedroom when Crystal is there. … I know it is Crystal’s space. At first there were issues of how much of a friend can I be with Crystal, but now there is not. I don’t feel that at all. I think I did mention before that if Crystal and I are together, I am really aware that we are not talking about Wanda, so I think that Wanda is comfortable with that. That she knows that is not something going on. I know that there are some things that Wanda has talked with Crystal about me, and I know there are some things that she hasn’t. I am okay with what she has told Crystal.

I spend the night at their house, on the pull out-couch and them in the bedroom. I did say that it would be weird to hear them having sex. I have not heard them having sex—possibly they have and I didn’t hear it—but that is something I guess that I have to get used to, or adjust to, or request that it does not happen while I am there. If Wanda and I are on the sleeper sofa together and Crystal is in the bedroom what does Crystal think of that? Her feelings are different than mine. I think she is more OK with it. I think she thinks it is hot. I don’t think it is hot.

In an apartment when there is someone above you having sex, it is like “Oh my god, can you stop that?!” But when it’s Wanda, it is more than “Can you stop making the noise?” There is something more personal to it. I have not quite figured all of that out—if I can get over that, or if it will always be there.

Throughout their interviews, Wanda, Crystal, and Ella dealt with issues of inequity, marginalization, and disclosures within the relationship. Some of the inequities were unintentional and resulted from Wanda and Crystal’s longer relationship, but Wanda and Crystal also intended to create certain inequities in their explicit agreement.

When these inequities started to impact Crystal in a negative way, the trio had to re-evaluate their arrangement, as Wanda told us:

At the beginning, Crystal was very much the primary—she still is—but there was a point where I was dating Ella and was with Ella. Crystal got to know all of the details—that was part of the agreement. And that was really hard for Ella, because Ella is a very private person. It was really hard for her to know that Crystal got to know everything. Sometimes, Crystal wanted to know everything and sometimes she didn’t. …

And another turning point was when Ella had shared something with me that I did not feel Crystal got to know. It was Ella’s story, and it wasn’t up to me to tell Crystal. At the same time, I did not want to just tell Crystal that I was keeping something from her. Instead I told her that there were things that she didn’t get to always know any more. At that point, we all talked about who gets to know what and that if it was something that was going to affect all of us, then Crystal got to know those things. But if it was simply Ella’s story, that was Ella’s decision to tell or not to tell. …

I don’t think that Ella is up to the level of knowing what Crystal [knows]. … It is not proportional; Ella does not know [as much]. And that has to do with Crystal and me being friends for so long. I am much more used to communicating with Crystal than I am with Ella. …

There are times when I notice that there is a cycle that happens in me, where I feel like—every once in awhile—I have to choose. In the beginning, it was difficult because I was trying to divide weekends between them. I felt like nobody was getting attention. I had no time for me; I had to be “on” the whole weekend.

As the interview excerpts above illustrate, people in polyamorous relationships sometimes consciously work on defining their relationships by making contracts, setting boundaries, deciding on disclosures, and negotiating time, attention, living arrangements, and sex. Sometimes these plans play out as expected, but often there are unanticipated or unavoidable conflicts that occur anyway. Although none of the excerpts above directly mention jealousy, it is nonetheless a central issue that polyamorous relationships must contend with, and an undercurrent that often accompanies these negotiations.