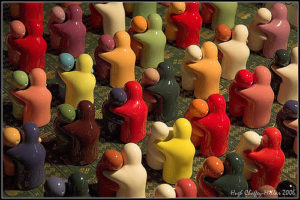 This is the second in a series of articles about the intersections of polyamorous identities and psychotherapy, adapted from our article in Sexual and Relationship Therapy, “Social and therapeutic challenges facing polyamorous clients” (Henrich & Trawinski 2016). In this installment, we provide an overview of Rami’s research findings, which uncover just how complex and diverse polyamorous identities can be.

To read the first article in this series, click here.

Rami’s research findings (unpublished, 2011) indicate several areas of importance to people in polyamorous relationships: jealousy, disclosure and identity challenges, and the importance of negotiation. This article focuses on several topics related to identity and germane to therapists: marginalization and social obstacles, and the challenges polyamamorists often experience when considering their own identities, disclosing to others, and seeking compassionate and effective therapy. Authors note: our focus on challenges that polyamorous individuals face does not indicate that there were no benefits reported in the study. In fact, respondents reported polyamory can offer some significant advantages, including deepened communication, expanded sense of family, and opportunities for personal growth, addressed elsewhere. 1

We focus here on polyamory as a lifestyle and identity rather than sexual orientation for three reasons. First, space constraints prohibit a sufficient discussion of sexual orientation. Second, participants themselves phrased their responses with a language of identity, more so than sexual orientation. Third, from the perspective of Process-oriented Psychology, identity is the individual’s awareness and perceptions from which identity emerges as the fluid expression of experience that is the immediate result of environment, social context, inner states, and personal history.2 Thus, identity provides the lens through which the participants view and the authors understand marginalization. In the following sections, we use participant statements and the authors’ personal experiences to explore these themes.

Crystal and Wanda were in a committed polyamorous relationship. Although Crystal did not have another girlfriend at the time of the interview, she was open to the possibility in the future. Her answer to the question “Do you identify as a polyamamorist?” is complex:

Crystal considered polyamorous identity as a process and explained that if or when she has a girlfriend in addition to her primary relationship with Wanda, then she would identify as polyamorous.

Several other participants viewed polyamorous identity development as an unfolding process. Anna, who was in the process of getting divorced and in a polyamorous relationship with Paul, responded:

I think [I’m polyamorous] but I’m not sure… I am dating a married man and it is all open and honest… I think that, had my husband been able and willing to be open to my relationship with Paul, I would have continued on with both of them.

Some in polyamory communities debate whether polyamory is a lifestyle choice or “hard-wired,” that is to say innate. 3 4 Some report a deep sense of self-as- polyam that pre-existed their contemplation of relationship constructs other than monogamy. Sue viewed her identity from 18 years of polyamorous marriage, concluding that it was not a choice but more a recognition of a pattern in her own experiences:

I don’t have an identity beyond noticing what happens to me… I have this pattern. Every three to five years somebody will show up where I need to pursue this thing of the heart, this very strong uncontrollable attraction. I need to be with that until it resolves itself in some way, and that seems to be my nature, who I am.

Like others who characterized polyamory as a deep identity and not a choice, both Sue and Helen saw polyamory as an essential identity superordinate to others. For Helen, polyamorous identity was political and defined her place in the world because she could not “squash” her polyamorous nature:

There is a distinction between someone who is polyamorous and someone who chooses to be polyamorous. It is different … in the sense that you have people who are gay, lesbian, or … honestly bisexual. But if you are bisexual and monogamous, you will end up being straight or queer… Monogamy trumps [bisexuality]. In my life, polyamory trumps everything else, it’s… the first for me.

Issues of disclosure and personal identity were important to all participants. Many identified connections with others in polyamorous communities as crucial support to navigate the complex issues. In addition to disclosure and marginalization, therapists serving polyamorous clients should be prepared to address issues related to personal, sexual, and relational identities.