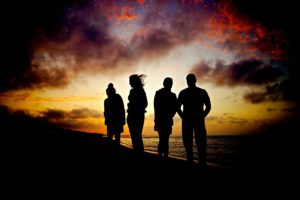 Eli Sheff is considered a leading expert when it comes to polyamory and stigma. Eli is the CEO and Director of Legal Services at the Sheff Consulting Group, a think-tank of experts specializing in diverse subcultures and under-served populations. The following is an article she wrote for Psychology Today about polyamphobia and discrimination.

Prejudice is making judgements about a specific kind of person based on stereotypes, assumptions, and incomplete or actively faulty information. Usually the person being judged is part of an assumed-homogeneous mass of others who are different in some way from the person who is judging them. Discrimination is taking prejudicial thoughts or attitudes and enacting them in real life, in behaviors, interactions, or laws, etc. that hamper, limit, or undermine the minority group.

Reality TV shows and coverage in everything from the New York Times to ABC News have put polyamory and other forms of consensual non-monogamy (CNM) in the media spotlight. Along with increasing public awareness of CNM comes a backlash of negativity that runs along a spectrum from simple discomfort with the idea at one end, to virulent polyamphobia from people who hate polyamory and take it as a personal mission to harass/destroy others in CNM relationships at the other. Mere negative reaction to polyamory does not necessarily constitute polyamphobia. Because polyamory is not a good fit for most people, many of those who react negatively are monogamous and simply do not want to have polyamorous relationships themselves, but do not really care if other people are polyamorous.

Discrimination is hurtful action taken against an identifiable minority group, and anti-polyam discrimination takes many different forms. Using data from my 20-year study of polyamorous families with children, I compiled some of the ways in which polyamorous people report experiencing discrimination. It is important to note that many of the people in the research reported positive experiences with polyamory, from family members who fully embraced them, their partners, and metamours, to friends who welcomed the new chosen family members and employers who invited the entire polycule to the employee holiday dinner. People living in urban areas, especially in liberal states, reported less discrimination than people living in conservative and/or rural regions. Most respondents were middle-class white people and did not mention racial or class discrimination, though respondents of color did mention concern for polyamory to complicate their already challenging interactions with racism.

Some people who come out as polyamorous find themselves marginalized, or even ostracized, from social groups that had previously accepted them. For others who come out as polyamorous, friendships that had lasted for years and appeared to be lifelong suddenly fade away or end abruptly in a flare of anger. Loss of these informal social ties can be especially harmful for people of color, who also most likely experience some degree of (often unconscious/colorblind) racism among polyamorous communities. It can be painful and precarious for people who don’t truly fit in to minority communities or the dominant culture, so people of color with unconventional relationships or sex lives face potentially higher risk when they lose social connections because they must rely more on social connections when other social privileges (such as white privilege) are not there to draw upon.

Some people who have come out (or been found out) as polyamorous have lost their jobs. In most cases, employers use a morality clause in the hiring contract that stipulates employees act in a moral manner. Employers determine what is moral and what is not. Even if the employee’s relationships are consensually negotiated, employers have deemed any sex outside of heterosexual marriage to be immoral. In another case, a coworker asked why their colleague was so evasive about what they did over the weekend. After the coworker kept asking, the colleague responded that they were private at work because they had a polyamorous family and were not sure what their coworkers would think about it. The coworker did not say anything more to the colleague at the time, and later that week the colleague was fired for sexually harassing the coworker by divulging their polyamorous relationship. It did not matter to the employer that the coworker had sought out the information, or that the colleague had been evaluated as excellent in their most recent evaluation.

In a previous blog I explained the reasons why polyamorous parents face custody battles over their children, most likely brought into court by ex-spouses or the children’s grandparents, rather than the state or Child Protective Services. When parents who are in polyamorous relationships face custody challenges in court, they have generally fared quite poorly. However, new developments in recent court cases have set some precedent for polyamorous families to retain custody of their children, and even to recognize three legal parents.

In some jurisdictions, housing is restricted to families related by blood or marriage. Cities and municipalities who wish to discourage immigrants from sharing housing or sororities/fraternities from establishing houses within their municipal boundaries routinely prohibit groups of people who are not married or parents/children/siblings from sharing a domicile. Even though they are not generally the initial focus of the laws, polyamorous families can become the targets of the law when landlords, neighbors, or housing associations want to evict polyam groups.

One of the most popular and subtle ways discrimination expresses is in selective enforcement of rules, regulations, and laws. For instance, in some states adultery is technically illegal, but people are hardly ever prosecuted for it. However, some legally-married polyamorous people have been threatened with incarceration for engaging in what law-enforcement officials labeled adultery, even though the polyam folks were not cheating on each other because they had openly negotiated the consensual non-monogamy. Having child custody challenged, getting fired, and being evicted can all be evidence of selective enforcement when others who have a more conventional relationship style do the same things and are not prosecuted for it.

If you have experienced discrimination as a result of being in a polyamorous or kinky relationship, please consider participating in the Narrative Project – a study on discrimination and boundary violations happening right now at the National Coalition for Sexual Freedom.