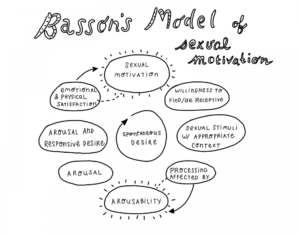 The following article has been adapted from “Taking a Closer Look at Basson’s Model of the Sexual Response Cycle,” Jo Flannery’s article for Sexology International. It has been edited from its original format. To read the original article, click here.

There is no one reason people choose to have sex. Rather, human beings become aroused by various stimuli and have diverse motivations to engage in sexual activity.

In (very) simplified terms, that is how Dr. Rosemary Basson would like us to understand our sexuality. Basson’s nonlinear model of sexual response seeks to more accurately depict the components of desire and the underlying motivational forces that trigger it.  Her work has focused particularly on women in long-term relationships.

In contrast to the traditional model of human sexuality put forth by William Masters and Virginia Johnson (who you may know from the fictionalized portrayal on the television show Masters of Sex), Basson’s model is circular and more complex: it acknowledges that desire can be responsive or spontaneous and that it may come either before or after arousal. This model recognizes that orgasm may contribute to, but is not necessary for, satisfaction, and that relationship factors can affect one’s willingness and ability to participate in sex. Another unique aspect of Basson’s circular model is that a person can enter the cycle at several different points.

Understanding Why People Have Sex
What makes someone want to have sex? People have varied, differing motivations—some obvious, others unexpected. Often, people have sex for the predictable reasons: to feel emotional intimacy, because of attraction, to engage in physical pleasure, and to express love. These are called approach motivations. They focus on positive feelings and desires such as affection and enjoyment.

Not all motivations to have sex are positive, however. There are also avoidance motivations, which are characterized by a desire to stop or prevent something. A person may choose to engage in sexual activity, for example, to stop a partner from leaving the relationship or for fear of not being loved.

Staying Mindful of Sexual Stimuli
Certain stimuli may turn someone on—that is, increase their interest in having sex. A sexual stimulus may come in the form of a kiss or touch from a partner. It could be something visual, or perhaps a smell or a sound. Regardless of their form, these stimuli are what initiate sexual arousal when all other conditions are met, including one’s willingness to engage in sex and commitment to remain engaged in the act. In other words, people have all kinds of different turn-ons, but turn-ons alone are not always enough for a person to have sex.

According to Basson, the context of a sexual encounter and a person’s state of mind may be the most important parts of the sexual response cycle. Context refers the current situation or environment in which sex could happen.

The predominant context is a relationship: for instance, a relationship characterized by trust, emotional connection, and flirty playfulness is much more likely going to increase the strength of a person’s sexual response as opposed to a relationship that is in turmoil and rife with resentment, contempt, and conflict.

A person’s mindset matters, too. One’s mindset includes all of their inner psychological processes, such as emotions, thoughts, and beliefs. If one is feeling calm, confident, attractive, and secure, they are more likely to become aroused and desire sex than if they are feeling anxious, unattractive, distracted, or unsafe. Sexual scripts—what one thinks sex looks like, or should look like—will also have an impact. If someone has a particularly negative view about sex, that person may feel closed off and be less likely to approach sex openly.

A Person’s Sexual Response Can Be Ignited at Any Phase in the Cycle
Not all sexual encounters begin with spontaneous sexual desire. It is common for partners to feel desire at different times, especially in long-term relationships. However, if someone is open and willing—and has the ability to stay mindful and engaged—they are likely to feel desire with appropriate sexual stimuli and context.

A rewarding sexual experience, which may or may not involve orgasm, usually encourages a person’s willingness to engage in sex in the future. On the other hand, a pattern of negative experiences may decrease a person’s interest in sex overall.

Spontaneous sexual desire manifests in the sense of sexual urgency, passion, or “horniness.” In Basson’s model, feelings of sexual urgency can happen at several points during a sexual encounter, and are particularly evident at the beginning of relationships, when sex is frequent.

Knowledge of Your Sexuality Is Power
Are you aware of and comfortable with your own sexuality? Just as there is no universal reason or motivation to have sex, there are many different ways people identify with and express their sexuality. The frequency and intensity of sexual encounters vary person by person, as does a person’s number of sexual partners at any given time. You may choose not to engage in certain activities during sex, or abstain from sex entirely. Additionally, your sexuality and feelings about sex may shift and evolve throughout the course of your life. There is no right or wrong way to have sex—or not have sex—or to define your sexuality.

Understand that sex may or may not be a component of your intimate, romantic relationship(s). Some relationships center on sex; others involve it very little or not at all. The sexual components of a relationship typically change over time.

Regardless, mutual happiness, fulfillment, and consent among partners are necessary ingredients in all healthy sexual encounters. Significant problems at any stage of the sexual response cycle can lead to conflict in relationships, as well as physical and mental difficulties and dysfunction. No matter what, it is important to know your mind, body, and areas for growth regarding intercourse, arousal, and desire.