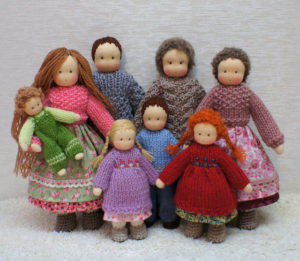 Eli Sheff is considered a leading expert on polyamorous families with children.  She has written three books on the subject including  The Polyamorists Next Door: Inside Multiple-Partner Relationships and Families, Stories from the Polycule: Real Life in Polyamorous Families and When Someone You Love is Polyamorous: Understanding Poly People and Relationships.  Eli is the CEO and Director of Legal Services at the Sheff Consulting Group, a think-tank of experts specializing in diverse subcultures and under-served populations.  The following is the first in a series of five articles she wrote for Psychology Today about children in polyam families.

As public awareness of polyamorous families has risen over the past 20 years, so has concern over their impact on children. In order to (at least begin to) answer some important questions about polyamory, this series of blogs reviews the findings from my 20-year study of children growing up in polyamorous families, gives a sneak peek at the findings from the fourth and current wave of data collection, and explains the issues relevant to custody of children from polyam families. The Polyamorous Families Study began in 1996 as my dissertation research for my PhD in Sociology, and since then I have collected three more waves of data and written a book summarizing the first 15 years of the study – The Polyamorists Next Door (2014).

Elisabeth A. Sheff Ph.D., CASA, CSE author of The Polyamorists Next Door: Inside Multiple-Partner Relationships and Families, details Sheff’s findings from the first 15 years of the Polyamorous Families Study.

Overall I have interviewed 206 people in polyamorous families, 37 of them children. Some of them have participated in multiple interviews, and some have just spoken with me once. In 2016 I began the fourth and ongoing round of interviews concentrating on children and young adults – some of whom I met when they were in preschool and are now graduating from college, and others who are participating for the first time.

Born to Polyamorous Families
A brief note about when children join or come to realize they are members of a polyamorous family: The data in this study reflect primarily the experiences of children who have grown up in polyamorous families, rather than those whose parents become polyamorous once they are adolescents or adults. Because I am following these families across time, most of these children have known about the polyamory nature of their families for quite a while.

Age Dependent Experiences
As with many children, the kids growing up in polyamorous families understand their families in the context of their own experiences, and those experiences are largely age-dependent.

Young Children 0-8
Small children do not think about their families in comparison to other families, and indeed do not even think of other people as separate from themselves for a little while. Developmentally, small children are self-centered and view the world through the way it relates to them. For instance, a three-year old child who had visited a friend at home for a play date returned home to excitedly report to her mother that “Tasha only has two parents! Just two of them!” The child from the polyamorous family took their family for granted as simply the way things are, and other people’s families seemed weird in comparison.

By the beginning of elementary school, children from polyamorous families are beginning to understand that their families are different from their peers.Even though they probably don’t understand the true nature of adult sexual relationships, they know that there are more people around their place than in many of their peers’ homes. Rather than being bothered by it, these kids from polyam families generally find the extra adults to be advantageous in a practical ice-cream and new toy kind of way.

Tweens 9 – 12
Developmentally, middle school and junior high bring the first glimmers of puberty and a much wider social world beyond the confines of the family. Kids from polyam families also become more aware of their social environments and their differences from others’ families. Their peers occasionally notice the polyam family differences, but are easily derailed from discussing polyamory because they have short spans of attention and are easily distracted. Tweens still tend to see parents’ partners as positive resources in life, useful for rides home from the movies and $5 for an after-school activity or a quick swing by the ice-cream parlor. Kids in this group may begin to develop an inkling that something beyond friendship is happening among some of the adults in their lives, but they generally do not fully understand or want any details.

Teens 13 – 17
Teens have a much more sophisticated understanding of social life than do their younger bretheren. By the time kids in polyam families are in their teens, they are usually well aware that their families are different from many others. Because their peers are also more socially sophisticated, it can become increasingly difficult to hide the polyamorous nature of the family from friends and others at school or on sports teams. In addition to navigating the complexities of coming from an unconventional family, these teens must decide what it means for their own budding sexuality. Even with their increased awareness of their parents’ romantic relationships, these teens are far more concerned with their own lives and invested in their own social worlds. Like many teens, they do not spend a lot of time thinking or talking about their parents’ lives outside of how it impacts them directly.

Young Adults 18 – 25
Many children from polyamorous families go to college after high school, though not all of them finish their degrees. Others go traveling, get jobs, or go in to the military. Especially for those in college- – but even for those who are not — a general practice of “hooking up” among their peers often means that young adults from polyamorous family backgrounds do not have to take a serious stand or even make a choice about whether to practice monogamy or not. For the most part, they can go with the social flow that allows multiple casual hook ups and the occasional more serious relationship to coexist without a lot of energy spent on definitions or labels.

Moving out of the parental home often requires young adults to establish new social circles to provide some of the support the used to get from parents and high-school friends. Young adults who have grown up in polyamorous families report that they have practiced the communication and negotiation skills that allow them to defuse conflicts with room-mates and establish supportive relationships that provide emotional intimacy where ever they live.

In Great Shape – In Context
The children and young adults who have participated in my research are generally in great shape, by which I mean they are articulate, intelligent, thoughtful, and capable young people. Although their lives are not perfect, they largely feel equipped to deal with life’s challenges – both with their own internal resources, and with support from others.

Volunteers
As in almost all family studies, my participants are volunteers who must decide to participate and wish to continue, and they can stop at any time. In practice, that means that mostly “healthy” families (ie. families that are not abusive, drug addicted, murderous, or pathological) volunteer for research. Inviting a researcher in to the family home to ask questions, observe family interactions, and interview children is far too dangerous for families with something to hide, so they generally do not volunteer for research.

Race and Class Privilege
Characteristic of the organized mainstream polyamorous community in the United States and abroad, the people who volunteered for my research are mostly white, middle class, and highly educated. When children are born into race and class privilege it is easier for them to be well educated, articulate, confident people because they experience a culture designed to keep them comfortable and safe.

Lots and Lots of Attention
In addition to race and class privileges, children growing up in polyamorous families enjoy the benefits of having an expanded social safety net. Both children and parents repeatedly mention the many advantages they find with having extra adults around, from help with homework and a trusted adult to talk to when they didn’t want to talk to a parent, to someone else around to get up with the baby in the middle of the night when someone needs to get to work in the morning, or a someone to step in and take over when the toddler or teenager has frustrated the parent beyond their ability to cope effectively. Practical, emotional, financial, and logistic benefits accrue for family members when they can draw from a wider range of people to seek assistance.

In the second blog in this series I detail the advantages and disadvantages these children identify as part of polyamorous family life.